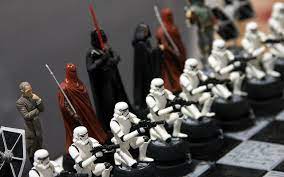 In a galaxy not so far far away from the centre of Market Harborough in late November. Having won all of their matches so far this season the galactic empire was attempting to show this new force in the division the taste of failure. As cold as the planet of Hoth with snow around, the stage set for this six-board battle as Harborough the rebel alliance lay in wait of the arrival of the Latimer’s galactic empire.

Episode iv, Lando Carlissian, Jon Redding, in the millennium falcon faced off against Boba Fett, Granville Hill. The millennium falcon was almost untouchable as it weaved in and out of Bota’ defences, causing his pieces to be spread far and wide across the board. With the defences shattered Boba launch a last gasp counter attack on Lando’s defences, that stood strong. A quick multi piece attack again from Lando causing the falling Boba’s king.

Episode v, Alistair Geear like Rey Skywalker is new to the ways of the chess force and faced General Hux, Dave Gamble. Hux opened this match with an ambiguous move order maybe trying to confuse the young Rey; but that mystified his intended development plan. Leaving Rey to react to each move carefully. The proceeding duel battles cost Hux a pawn but more worrying is how his stance had weakened in the game. However, Hux seemed to panic and started to worsen his position, first by trading away his powerful bishop and then allowing further tactics. Hux’s pieces were first tied down. He recovers somewhat as Rey inadvertently drops two central pawns, but Rey had activity. Building pressure on Hux’s king, Rey sacrifices a bishop , although its capture was off-limits, was a satisfying way to induce resignation.

Episode vi, Hans Solo, René Butler, was called upon again to play in this division against an old foe that had previously defeated him many moons ago the lovable Jabba, Roy Gurney. Hans Solo had been successful in his invasion against Loughborough battle cruiser the previous day but showed little signs of fatigue and was as a razor when this battle began. Jabba has tricks and traps set throughout his Hutt space and can never be under estimated. Hans knew this after the opening moves lead to and Englund gambit, treading carefully not to fall into a deadly pit of doom like he’d done on a previous encounter. Hans without errors navigated the tricky lines before setting about and winning the game. First he trapped Jabba’s queen on the side of the board meaning this powerful weapon was out of the game before driving his (d) pawn to the 6th rank and thus blocking in Jabba’s light squared bishop and giving an open e file. With Hans’ king safe and Jabba’s king trapped on F8 next to the open E file, the blasters and cannons a lined on this route into the heart of blacks position. It was only a matter of time until Jabba’s kingdom collapsed and scalp fell.

Episode iii, Darth Vader, Mick Garland, faced his son Luke Skywalker, Mike, in this battle. They both know each other’s games well, having studied their enemy prior to this match, the same chess genetics would be difficult to split. Luke was slightly jaded after a long conflict the night before, where he was victorious against a Loughborough battle cruiser. Both Jedi’s used the force and tried to undermine the centre in the opening moves. Luke positioned himself well for an attack along the two long diagonals towards Vader’s king. Vader pushed in the centre and closed this attack route down. Luke swiftly exchanged some material leaving Vader open to an attack. Throwing Luke’s pawns towards Vader’s king with rooks behind looked like the end was coming until black found defensive resources just in time. However, Vader offered a draw to save himself, a possible slow death whilst the game was still within reach. Luke used the force and knew that there was no way through and that white could survive, taking the draw ensured the victory for the rebel alliance.

Episode ii, Obi-Wan Kenobi, Dave Curran, faced the leader of the empire Count Dooku, Brian Slater. Both have many years’ experience in battling enemies and have honed their skills and use deadly moves to strike their opponents. Moves were quick and lethal as pawns on both side cut off.

Obi-wan advanced bravely having created a weakness in the defence of Dooku, lining up queen and rook on the 7th rank, Obi-wan cut through the blast doors and slayed his wounded enemy.

Episode i, on board one was the powerful Mace Windu, Mark Waterfield facing Darth Sidious, Jay Vallabhdas. The battle between the two sides was about to get underway when coming into the seen last minute was master Windu, having to battle the public transport before his match.

This must have unsettled Windu as he mishandled early middle game and allowed Darth Sidious a pleasant position with dark square weaknesses.

Windu made a terrible strategic decision to trade queens neutralising all the attack and improving Darth Sidious’s pawn structure. However, you don’t get to become a Jedi master without knowing how to fight back and gained decent winning chances in endgame after winning a weak pawn. Both warriors had to battle the clock as well as each other in the closing stages. After much simplification and a chance for Sidious to obtain a textbook draw, he blunders a bishop with check which loses prosaically.

As the Credits roll up the screen it was clear to see that the Harborough rebels had defeated Latimer’s Galactic Empire by 5.5 to 0.5. The Rebels now move on to their episode whilst Latimer retreat to come back with a new death star later on.