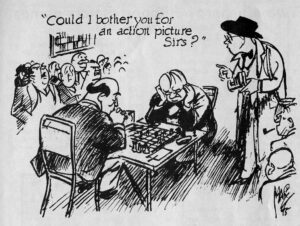 Harborough Hombres faced a tough draw against Title contenders Wigston Warriors, who fielded a full strength team of 2,000 plus players.

A mix of English, Dutch and Catalan speakers, there was no e4 to be seen.

At the first roundup, Sheriff Romilly was standing tall; a solid position covering all threats. However, staring across the prairie he could see that his Deputies were looking down the barrel of some big guns, with no cavalry in sight.

John with his typical never say die approach was trying to shoot his way out of the OK Corral, whilst Ian was attempting to defend a pawn down against one of the County’s most wanted gunslingers; but the outlaws were smelling blood. Dave was only firing blanks. 25 moves in, and not a piece or pawn had been taken by either side, but he was running out of ammunition.

The Sheriff was the first to finish accepting the draw to maintain Romilly’s great start to the season. Three matches, three similar games and three identical results. Mr. Consistent.

Dave, after making his first capture, realised it was a mistake! and was quickly shot down, despite all 16 pawns remaining on the board. Is this a record?

John and Ian then succumbed to the relentless pressure, resulting in an honourable loss against the gunslingers of Wigston. 3 ½  ½

So, 3 games into the season, we have now faced both the likely title contenders away from home, without our regular Board 1.  But we are now at the top of the fixture hill, and it is downhill from here to the finish!

Finally, a word of advice for those travelling to Wigston. The outlaws at the Liberal Club are a really friendly gang but beware the dangers of the saloon before the match. We were faced by the epitome of Depression itself, whose long face downed all before her. By the end of the night her chin had frayed where it dragged the floor. So only enter with happy thoughts or (for Harry Potter fans) a patronus charm!