A perfect score for Harborough 2 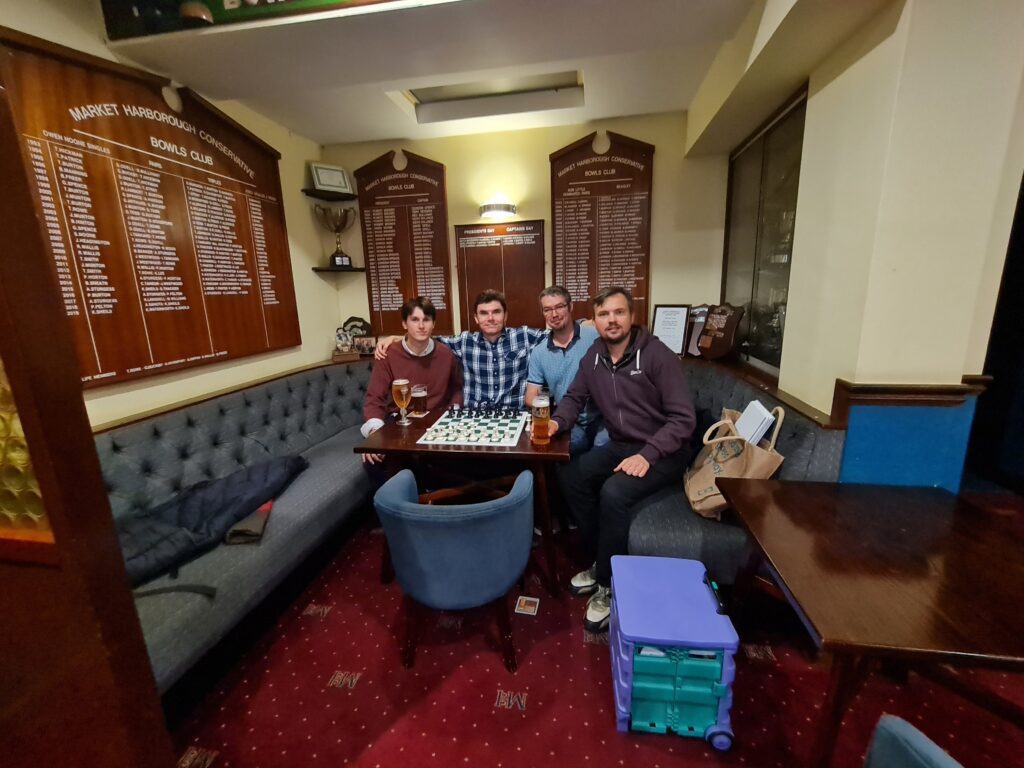 More than 500 days have elapsed since the wide acceptance of a global pandemic, and it is roughly the same amount of time since the Market Harborough Chess Club has seen over-the-board competitive chess. It is in this time we have been shook by death, loneliness and a total disruption to our everyday lives (not to mention longwinded Bond film delays). To chess players, the loss of chess-in-person has been balanced by the gain of many new players who have re-discovered this beautifully ancient game. This week, after many months of online chess, both sides of this coin received the experience of competitive OTB chess.

While not the first match back, as Harborough’s no.1 team played in Syston two evenings prior but as a first home match, the 2nd team made acquaintance with a cosy space in the upstairs of the conservative club. In my own case, I was completely new to playing OTB competitively and soon fumbled with my opponent over the 3rd board as we switched an extended hand to a friendly elbow bump. Fellow seasoned teammates: René Butler, Mike Garland, and Mark Waterfield (boards 4, 2 & 1, respectively) did not suffer the same mild awkwardness and the clocks started counting down.

Full concentration had begun, I had Black against my opponent who opted for 1.e4, I replied with 1… c5 (the Sicilian) which he followed with the unusual 2. c4. I would later learn this to be the Staunton-Cochrane Variation, but it wasn’t a choice I saw often, which made me question if this gentleman knew something I didn’t – as often the question with unexpected openings. Nonetheless, I aimed to play solid moves and caught my opponent with some tactical combinations utilising my fierce bishop pair down the a1-h8 and b1-h7 diagonals. My opponent resigned by move 18 as he was about to be down too much material. Having finished much earlier than the other 3 boards and without the usual virtual barrier, we were able to sit downstairs to indulge in an instructive post-mortem and friendly chat.

The early end to my match allowed me to closely watch the other games still at hand. On board 2 Mike Garland Jr. as White was equally bewildered by his opponent’s unusual choice of opening, with 1.e4, b6 2. Nc3, e6.
It’s worth noting that no more than 15 minutes had passed in our silent battle of the minds (around move 13 for Mike) when the pool players next door started playing early millennium rock tunes and Britney Spears. Mike and René stepped out to have a polite word with them, unfortunately the best we got was a closed door.

Mike had a strong start up a Rook for a knight. Black had expanded on the Queenside and due to a tender king-side also opted for a long castle. Queens were off the board by move 25 and the position became more and more complicated with scattered pieces and weak pawns all over. In what can only be described as a mental blink Mike failed to recapture a bishop but received 2 pawns in the process. Black made inefficient use of his time making insubstantial moves with the occasional checks while Mike’s h-passer and active king play became a growing threat. With barely minutes on the clock, Black attempted to resecure his position but ultimately fell to a simple knight fork losing a bishop. The advantage was made clear but Mike won on time.

On first board Mark Waterfield as Black and his opponent blitzed through typical London theory, trading Queens on move 7, gifting Mark the semi-open a-file in the process. With a central pawn blockade and all 4 rooks tied up in a struggle over White’s passed a-pawn, it was time for the kings to march up the board for support. The contest for passage to the other side is often too prosaic for the likes of many a chess player, however this occasion should not be mistaken as such. The necessary consideration to the many minutiae of moves at hand gave way to endless tension.
At some point in this endgame Mark turned down a draw offer, his opponent could only have been wearing tired as his defence faltered. While the White King finally got access to the 5th rank, he also allowed Mark’s rook to penetrate behind enemy lines. White unexpectedly drops a bishop. He tries to leverage his King’s activity by grabbing a pawn only to get trapped in the empty space of Black’s territory. Desperate, White gives up a rook to try and get some initiative with the advancement of his a-pawn, but Mark calmly makes way for the bishop to blockade. Game over for Kirby’s top board.

On fourth board René Butler as White rolled out another London. Both players developed similarly, momentarily there was an almost perfectly symmetrical position with White a move ahead. Into the game, the pawn structure had mostly closed down, leaving each side to shuffle their pieces to prod at each other’s defences. In building pressure against the castled King, René diverts his force from the queenside. The Kirby player manages to successfully repel any potential for attack by White while maintaining pressure of his own against White’s queenside pawns.

Stretched thin, Black snags the a-pawn. René swings his Queen and knight across the board to quench the rogue rook with a trade. Black declines only to discover the rook has wandered too far from support and is doomed to be taken by the knight. In vain, Black gives up the rook for a pawn immediately followed by a knight sacrifice. Drastically low on time, living on increment, he checks White’s king but his initiative doesn’t take him far.
A queen trade is secured, although it was at this moment that René’s opponent makes a 2nd illegal move of the game.

A first illegal move earlier gave a bonus 2 minutes on the clock, but a second forfeits the game. To his credit, being both a significant amount of material and time up we can safely say Harborough was expecting a final win to finish the night at 4-0. Irrespective of the means the satisfaction was equal. With a stunning start to the season, Harborough 2 can only hope to go on in a similar fashion. However, after such a hiatus from OTB chess, we agree it is better to have played and lost than to never have played at all.