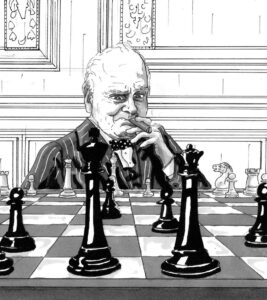 At half 7, after enjoying a miraculously bright snowy day in April, Harborough Cuatro sat down for round 6 of the 4 Nations Chess League. This week had Cuatro 1 against yet another team from Uxbridge, the Uxbridge Bulldogs, with Cuatro 2 against Crowthorne 2.

Disappointingly, our first team fourth board was left without an opponent defaulting a win for Rob Gibbison.
On third board, Mark Waterfield as White was offered a free pawn in a modern variation of the Scandinavian defence and appeared to keep his advantage. Although by the middlegame Black was stabbing at the king-side with a queen and knight combo, which could have been worrisome to some players, but Mark was more than capable of side-stepping any serious danger. Proceeding into a rook and pawn endgame, Mark, a pawn down, was quick enough to catch Black’s passers and secure a draw by insufficient material.

A King’s Indian Defence against a Queen’s Gambit appeared on 2nd board, Jon Redding as Black was quickly down the exchange with a sad pair of knights in the corner of the board. Making the best of a rough opening, Jon manged to centralise his knights on the fourth rank, only for one to get trapped by a quiet pawn push from White. With nowhere to go, Jon’s knights started throwing jabs in White’s territory but soon ran out of steam and was a whole rook down. Any chess player could tell you Black was effectively lost, but no one could have anticipated Jon to be the luckiest man of the tournament, after all those dizzying knight manoeuvres his opponent mouse-slipped, giving away his precious queen. 2.5-0.5 to Harborough.

On top board, David Walker as White proved patience is key. 20 moves in, Dave had 24 minutes on the clock compared to his opponents 43 (45 minutes plus 15 second increment time control, for those unfamiliar), however the strong positional advantage was evident;
a good knight on e5 and cutting d-file domination. Before Black had the chance to make counterthreats around the White king, Dave had the 8th rank infiltrated with queen and rook delivering checkmate 3 moves later. A nice finish to Harborough Cuatro’s second best result since the 4-0 bagel against Watford Juniors in round 4.

On 2nd team, René Butler on 4th board, having done his homework, played a perfect mainline response to the Italian’s early knight attack. Being 2 pawns down at the beginning of an endgame isn’t ideal, but material is simply immaterial when a checkmate presents itself.
Once his opponent took his eye off of his weak back rank, René wasted no time in shifting his rook to the 8th rank trapping White’s king with forced mate to follow.
A (laughable) draw was offered by his opponent but, of course, it was of no good to them. One-nil start!

Granville Hill on board 3 (should’ve had the White pieces but was Black) responded to d4 with a kind of Budapest Gambit. Instantly punishing his opponent for weakening his dark squares, knives were out. Granville was swinging; a series of checks drew the White king up to the d3 square and back to d1.

On move 16, White was almost setting up for the next game. The unhappy regal couple had switched over, but otherwise White’s remaining pieces sat on their own squares. On move 25, the Crowthorne player ran into a fork against the queen and king on e2 and threw in the towel. 2-0 to Harborough

Opting for the Sicilian defence against 1.e4, Mick Garland Senior on 2nd board was well matched against his opponent. Trading knights on c6 gave Mick a well-built pawn centre but most pieces were traded off before getting the chance to make use of them; a drawn endgame was looking likely until suddenly…
For fork’s sake! A devious knight move had Mick losing the exchange and once it came down to a knight vs rook endgame Black was stretched too thin to defend pawns on both sides of the board. Harborough Cuatro 2’s first loss.

On top board, Alistair faced the classical Dutch Defence to his usual Queens Gambit as White. Both players whipped out their opening moves, but while White slowed their play, Black rushed to trade pieces, bleeding pawns in the process and forgoing the sting of the aggressive attack the Dutch is typically known for. In an endgame 3 pawns up, all that was left was for Alistair to put it to bed, marching the remaining pawns up the board, trading rooks and queening to deliver checkmate shortly thereafter.

A 3-1 win for Harborough Cuatro 2, and a victory for both teams to put wind in the sails for what could be the 7th and final round in the 4NCL online tournament. It has been a fantastic run so far, and this week’s match is only a further testament to the wonderful and exciting possibilities of chess.